@HabitEXE i think you could totally get away with being general while using dungeon or toy imo, those are pretty broad and ubiquitous terms in queer kink spaces, at least i find

@HabitEXE i think being constrained to a clever url using the .toys top level domain can also encourage more creativity on the front, gives clear direction ^^

@HabitEXE feels very utilitarian. How about using the .toys top level domain?
something like:
home(.)for.toys
mastodon.toys
i think it'd also be more clever and subtle than putting kink in the url (of course, kink should still be somewhere in the tags/description/equivalent)
etc. Something which would imply the users are toys, much like how plush city kind of implies their users are plush.
Not that everyone is, but it's fun theming

@HabitEXE i've always preferred firing back and then bring pinned down for speaking out of line, but that's me :p

@HaruspexSys This is all very beautiful. theres times ive felt like i was filled with love like this too, but sober lol. Maybe i should do shrooms

i know of at least two people who feels like this and (i assume) dont subscribe to the otherkin religion. Is there a community for ppl like this? im kinda in need of some guidance and direction lol.

So uh, i just finished listening to the Pet Test 2 by Verity Lay. and um.
Wow.
Heres a link to the file, note its a sequel. https://verityley.bandcamp.com/track/pet-test-2-treats-and-heat

This was intense. part 1 was already the file that sent me particularly deep and was particularly effective, and Verity just took an S tier and made it feel mid with part 2.

This was genuinely liberating. I started crying when it ended b/c I didn't want it to be over. I am in awe.
Its unlocked feelings I never knew existed like they do. I want to reiterate, genuinely **liberating**.
Im a bit embarassed to admit, but it reminds me of stuff I started feeling when I began my transition. "You know those things you fantasize about thatll never come true (youll never be a girl, you'll never be a puppy). Well, youre wrong lol".
At least, ill be able to experience being a puppy sometimes.
For being a woman, i at one point thought it was completely sexual. Guess that's now true for being a dog, too.
Even my collar i sometimes wear just... makes me feel so safe and at peace atm. Gonna be a tear filled night tonight.
i just need regulars in irl life to bring the doggy out now i suppose.

@HaruspexSys i love hearing about this kind of stuff personally. i've had other people's trip stories make me cry before. So yeh, please share if you'd like to :3

@SuricrasiaOnline i personally feel disincentivized from commenting on people's posts because it shows up in people's timelines on twitter. Also, something about the culture of the fediverse just makes everything feel more personable, at least to me.

@HabitEXE I would personally say limit but not suspend, unless it takes up an annoying amount of resources. 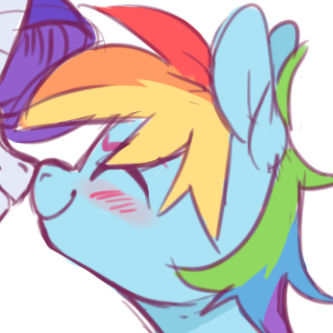 A lot of text

A lot of text

@jonnypencils i'm pretty new too, but here's what i've gethered:
1. Unfortunately, yes. Think of instances like their own little websites, that connect to all the other websites in the fediverse. If, say, twitter goes down, it all goes down with it. So it may be a good idea to pick an instance you think will be around for awhile. However, you can regularly back up your data in your preferences using the export feature (follows, lists, blocks, mutes, domain blocks, bookmarks), then import them into a new instance
2. unfortunately, you would lose your followers, it's like the website you're on went down, and people on other websites were following you. (infact, that's exactly what it is)
3 nothing, actually. That's a double edged sword of the metaverse, it's an excersize in becoming ungovernable. Being federated, its a lot harder to silence certain speech or ideas. However, mastodon provides extensive tools to essentially shun and de-federate those types of communities. Most instances will block your instance if it contains hate, you can also block instances at the user level. Instances also have the option of only whitelisting other instances. You can create and export lists of "problem instances" that people can use when setting up theirs, in order to be seen in a more "official" capacity, you're required to shun those instances, etc., etc., etc. All that said, (in my experience) mastodon has been hella queer, hella leftist, and hella accepting.
4. Sure! it's obviously not required, but if you find reason to do that, nothing is stopping you. Since mastodon is open source, many users have made their own front ends (programs and websites that load mastodon), and they can put whatever kind of modification into those instances they want. Account switchers (or even being logged into two accounts at once, and seeing multiple timelines) are popular features. I've been recommended "tusky" i believe it's called. but here's a list of ones that the mastodon org has officially acknowledged, note that these are all 3rd party: https://joinmastodon.org/apps

Take what i said with a grain of salt, i'm new here too. Hope that helped!

@lunalapin sounds like the battery's reached it's limit. I bet you could find a replacement battery, though you'd have to know what you're doing opening the thing up. else, looks like you'll need to keep her docked

@HaruspexSys welcome to the site! good to have you ^^